Revenge of the Fortysomethings 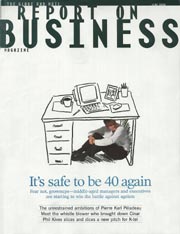 Shove over, kids. The grownups are back in demand

(Excerpt from The Globe & Mail’s Report on Business, By Trevor Cole, June 2000)

On a Friday afternoon in March, in their second-floor meeting room in Toronto’s Yonge and Eglinton district, the members of the Executive Advancement Resource Network meet in a room that eight years ago regularly held 85 out-of-work execs. Today there are 17-five women and 12 men, most if not all over 45-sitting in business attire in a long U of plastic chairs listening to the aggressive proddings of E.A.R.N.’s Executive Director Colleen Clarke.

If these people are operating under the assumption that their age and experience have turned against them, clarke, a woman of 47 who’s been advising middle-aged job seekers for a decade now, wants them to know that it’s something they have the power to fight. And the first rule of battle seems to be: Don’t give recruiters any help figuring out how old you really are.

“How many of you have taken your graduation years off your résumé?” she asks, striding about the room. Six hands go up. “You only have to go back on your resume 10 or 12 years,” she insists. “If you take your date off your graduation, it leaves them completely in the dark!”

She offers more tips to the group: Shave off your beards and mustaches, try liposuction on your hips and don’t forget you can dye your hair. (Grey hair, says Robert Gage, hairdresser to Toronto’s elite, adds 15 years to someone’s appearance. That’s why these days, he says, “Our colour department throbs with gentlemen.”) Clarke sticks a hand into her own curly red do. “Number 64!”

Clarke has concerns beyond appearance too. She instructs her members on the importance of eye movement and body language, on the necessity of having prepackaged stories of their achievements at the ready, on the need to have a lilt in their voice and a smile on their face. After years of being out of the market, say counsellors and image consultants, the job-seeking skills of middle-aged men and women are rusty. “Pre-Victorian,” says Clarke.

She wants her charges to remember something about hiring managers: “They aren’t your friend. .They’re a bunch of actors, trying to butter you up so you spill the beans about your age, your cancer, whatever. .Don’t go telling them.”

There are those who feel the sort of deliberate obfuscation that Clarke recommends is counterproductive. Not everyone agrees, for instance, that appearances count more heavily than ability in the older worker’s job search. “If a person has grey hair or doesn’t have grey hair, I don’t think that matters,” says Ian MacArthur of Madison MacArthur Inc. “I think the hiring managers today are looking for the skill sets.”

Jean Gaudry, a worldly recruiting veteran, thinks trimming graduation dates and years of experience from résumés is actually dangerous. “There is a backlash to that,” he says soberly. “Professional headhunters, if we see that, we will interpret that as a person who is not transparent.” And transparency in managers and executives, says Gaudry, is more important than ever before.

Forgive Clarke’s cynical pragmatism, though. She knows that middle-aged job seekers have long had to battle engrained attitudes and perceptions, most of them now out of date. Last year, University of Toronto graduate student Ellie Berger examined studies of employer attitudes toward older workers worldwide. Many of the negative views she uncovered seem to have come from studies done in the late ’80s and early ’90s, as the economy was contracting. One 1988 study she found linked older workers’ “perceived poor health” to assumptions of absenteeism, lower stamina, lower productivity and inability to learn new skills. And a 1992 study said employers considered older workers “less able to perform” and “more difficult to integrate into the corporate culture,” views that would certainly have helped to justify any decisions to downsize.

Whether it’s due to greater understanding in the workplace, or greater need, the studies Berger found from later in the decade tend to show that employers now have revised their opinions. In a 1996 study-part of a series entitled “Issues of an Aging Workforce”-she found that “employer’s attitudes toward older workers are generally positive, contradicting much of the earlier literature reviewed in the IAW project.” The same study found that generally “employers believed that older workers could adapt successfully to new technology”

The rejection of the silvery-haired executive may simply have to do with the promise of performance, a function of presence and demeanour, not age. “Employers,” says Warner Woodley, “are really concerned about the energy level. So if you look older, if you act older, you could be putting yourself at a disadvantage.”

Max Ludkowski (not his real name), an information technology specialist with years of experience in project management, has been looking for work now for almost a year. The interviews he’s managed to get in his field have lasted a remarkably short time-12 minutes in one case, and not even that in the next. In the second, the interviewer looked at his resume, chatted for a while, and then told him, “You know I really can’t give you a position here because you’d intimidate my other fellows that you’d be working with.” And Ludkowski recalls him saying at one point, “I just had to bring you down here to see you.”

Shorter than average, balding and wearing a thick white mustache, Ludkowski exudes the calm charm of a grandfather heading nicely toward retirement. He has a genial, loping way of speaking. He also has a history of heart trouble-information that for a time he tended to volunteer in interviews-and he has just recovered from quadruple bypass surgery. Given all of that, you can appreciate why some employers might pause before hiring someone of his advanced age.

Lately, as a member of E.A.R.N., Ludkowski has been listening to Colleen Clarke and thinking about dyeing his hair and shaving his mustache. But he says he’s not yet convinced. “If you could guarantee me that I’d be employed in the next couple of interviews if I dyed my hair, I’d do it.” Then he asks, “Just out of curiosity, and I won’t be insulted. But how old did you think I was?”

I tell him I’d have put another 10 years on him. “Really” he says, startled. “Okay” He’s convinced.

As attitudes continue to adjust, and the economy appears free of yawning troughs immediately ahead, the outlook for aging workers has arguably seldom been better. If the over-45s feel less confident than they should, maybe it’s their own outdated assumptions getting in the way. “Older workers have been told, by all sorts of people, that they’re less marketable,” says Jean Gaudry. So they reduce their income expectations, they take whatever jobs they can, and heading into interviews, they let their anxiety take hold. And sometimes it shows.

Mark Berkowitz, Exec-U-Net’s Canadian voice, offers what may be the most constructive perspective on ageism. “My advice to anybody who is faced with the issue,” he says, “is to make it a non-issue. You can. Make it a non-issue in your mind, and stop worrying about it.”

This entry was posted in In the Media. Bookmark the permalink.